Daenerys Targaryen’s dragons are the only children she can ever have on Game of Thrones, it is known. And yet, one fan theory that seems increasingly probable says that Jon Snow will get her pregnant.

The penultimate episode of Game of Thrones Season 7 makes not one, not two, but three references to Daenerys and Jon’s potential offspring. First Jorah mentions it, then Tyrion, and finally Daenerys herself. One interpretation suggests that their potential kid is the true “Song of Ice and Fire” from the book series title.

But go back a step. How would this happen? Daenerys believes she’s infertile because of the witch Mirri Maz Duur she enlisted to save Khal Drogo in Season 1. Of course this plan backfired horribly. Duur told her that “only death can pay for life,” and while Dany thought this only involves sacrificing his horse, it turned out to be the life of their unborn baby.

To make matters worse, after all that Drogo was alive but effectively brain-dead. The implication is that in one fell swoop, after trusting the wrong person and the wrong magic, Daenerys lost her husband, unborn child, and potential to ever have human kids.

But it’s the “only death can pay for life” part that fans are latching onto, because in Season 7, Dany’s dragon “child” Viserion has died. And she’s looking awfully cozy with Jon Snow. 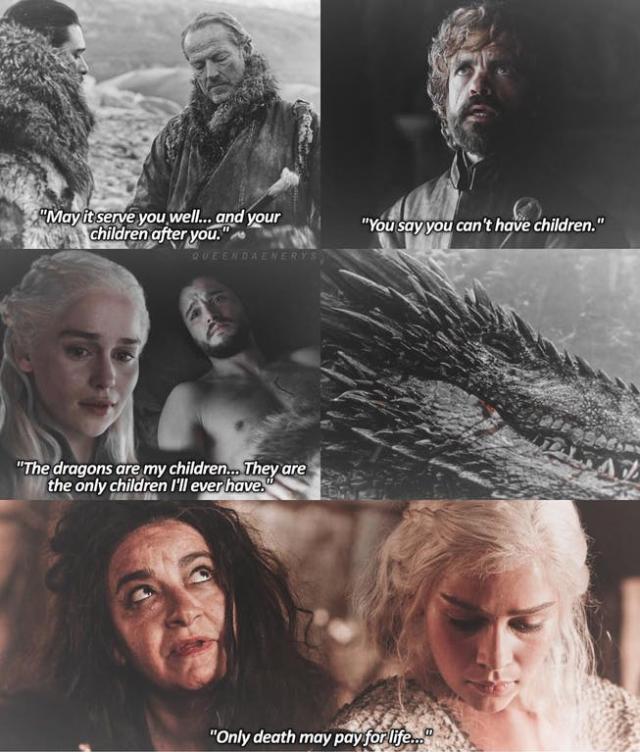 “Only death can pay for life”

So perhaps the death of her dragon child will pay for a new life. Of course, some fans are also theorizing that this ominous prediction will mean that Dany pays for her child’s life with her own. After all, her own mother died in childbirth and Jon’s mother Lyanna Stark did too.

But for now, there are no indications about Daenerys’s death in the show. There are, however, several indications that she will have a child with Jon.